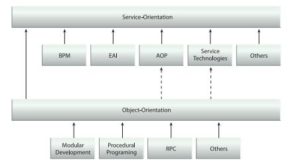 Service
A service is a unit of solution logic (Figure) to which serviceorientation has been applied to a meaningful extent. It is the application of service-orientation design principles that distinguishes a unit of logic as a service compared to units of logic that may exist solely as objects or components. Subsequent to conceptual service modeling, service-oriented design and development stages implement a service as a physically independent software program with specific design characteristics that support the attainment of the strategic goals associated with service-oriented computing.

Service Capability
Each service is assigned its own distinct functional context and is comprised of a set of functions or capabilities related to this context. Therefore, a service can be considered a container of capabilities associated with a common purpose (based on a common functional context). The individual bullet items within the service symbol from above Figure are capabilities.

The term service capability has no implication as to how a service is implemented. Therefore, this term can be specially useful during service modeling stages when the physical design of a service has not yet been determined (at which point it is further qualified as a service capability candidate).

Service Consumer
When a program invokes and interacts with a service it is labeled as a service consumer. It is very important to understand that this term refers to the temporary runtime role assumed by a program when it is engaging a service in a data exchange.
For example, you can create a desktop application that is capable of exchanging messages with a service. When it is interacting with the service, the desktop application is considered a service consumer.
You can also design a service to invoke and interact with other services (which, in fact, forms the basis of a service composition, as explained in the next section). In this case, the service itself will temporarily act as the service consumer (below Figure). Many of the examples in the upcoming chapters show consumers as services. Furthermore, due to the unpredictable nature of data flow through service compositions, the directionality between consumers and services is intentionally not standardized in diagrams provided in this book (which is a deviation from the left-to-right convention used with traditional client-server illustrations). 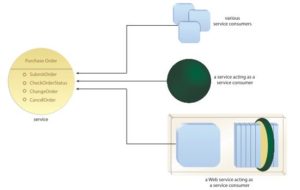